The only way I can begin 52 Ancestors in 52 Weeks is with my favorite one, Kate Lucy Waters Moran.  She is my favorite for a variety of reasons.  It took me six years of active searching to even discover her name.  I owe that discovery to my research mentor and friend, Bee Dalton.  She turns over every stone and taught me some excellent techniques, such as looking for and tracking siblings of the ancestors we are researching.  In order to talk about Kate, I have to talk about her children, which I think is fitting as I relate motherhood so closely with her identity.

Kate Lucy Waters Moran is my 3 x great grandmother.  I knew her oldest child's name, my 2 x great grandfather, James Joseph Moran.  I knew he was born in Worcester, MA and that his parents were from Ireland because when his wife died, he lived with his son, daughter-in-law, and their four children, including my grandmother.  She told me what she knew of him and his background which was only where he was born and that he came to San Francisco, became a police officer, and married Mary Catherine Manley.  He was not for sharing family stories.  I found his brother in a newspaper article, the San Francisco Call, on December 25, 1908.  He was in a list of newly appointed civil servants.  It listed names and addresses of the new police officers, and he had the same address as James Joseph!  I started tracking William Thomas and found a coroner's report for him.  The reporting party was my great grandfather, Frederick John Moran, and it listed him as William Thomas' nephew and James Joseph as his brother.  Then I saw the brothers' parents' names.  Kate Lucy Waters of Ireland and Patrick J. Moran of Ireland.  It was my first time experiencing a brick in the wall falling down.

I have not found as much about Kate as I would like, but here is what I know so far:  I do not have her birth record yet, but the records I have report her birth around 1848, perhaps May of 1850, in Ireland; the county is still unknown.  I have her marriage record to Patrick Moran on February 7, 1869 at St. Mary's Church in West Brookfield, Worcester, MA.  They lived in Spencer, Worcester, MA at the time.  Patrick, 23, was a bootmaker.  Kate was 19.  She had six children from what I have found:  James Joseph, my 2 x great grandfather, born November 27, 1869 in Spencer, MA, William Thomas, born February 5, 1876 in Denver, Colorado, Elizabeth C born October 17, 1876 back in West Brookfield, MA, John Michael born August 9, 1878 in West Brookfield, MA, Daniel born December 28, 1879 in West Brookfield and died January 9, 1880, MA, and a stillborn baby born February 12, 1881.  Sadly, Kate passed away March 17, 1881, and her death record lists the cause of death as childbirth.  Her occupation is listed as Homemaker, and her parents are reported as Michael Waters and Kate Murphy, both of Ireland.  She was buried at Sacred Heart Cemetery in West Brookfield, MA without a headstone.  A kind woman took a photo of where she is buried sans headstone, and I have a cemetery map showing her location.  I hope to someday have a headstone added for her, and I am very curious about Kate and Patrick's time in Colorado and return to Massachusetts.

It took so long to find her, and it warms my heart knowing how she was found.  Although James Joseph seemed to never have mentioned her, her entire name was recorded on her son's coroner's report 50 years after her death.  She was remembered and loved. 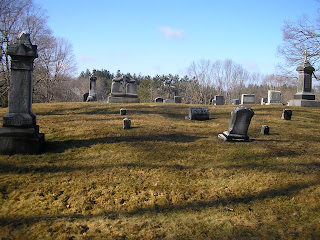 Photo by KL of FindaGrave.com 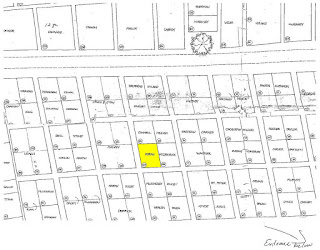